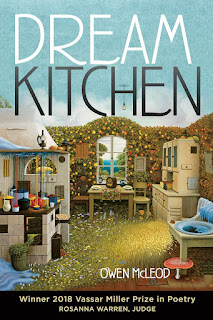 Inflated elves give way to inflated rabbits clutching inflated carrots. Smiling toast. Water that was once the sky. Bubba is Lord. Reading DREAM KITCHEN is an enriching, life-affirming experience.

Owen McLeod writes with a child-like wonder and fascination that seems to be a celebratory exploration of language. Seemingly melding his own life experience and vocabulary with a dash of the imaginatively marvelous, these poems ignited, intrigued and perplexed my own imagination throughout.

Throughout DREAM KITCHEN, McLeod’s first full-length poetry collection, it feels like the poet is writing an invitation of sorts. The poet invites the reader to look at the world through his eyes, to see with his vision in the current moment, the current poem. These poems are remarkably inviting. With an unquantifiable depth of emotion, the way this poetic captivates attention, and rewards the reader with a sincerity in the humor and an open-hearted insight? Marvelous.

These poems seem to run the entire gamut of the emotional world. Curiosity, longing, joy, pain, sorrow, fear, ecstasy; it’s all in here. Some of my favorite lines come from McLeod’s ‘characters’ being set on a process of discovery. There is a running theme of seeking and searching throughout the collection as well. Such as in the final lines of MIDDLEMARCH, when the speaker’s son is fascinated by a chocolate bunny rabbit on Easter:

“He bit off the head and peeked inside,

Then wept when he saw it was hollow.”

Or, in SOMEONE JUST SEARCHED FOR YOU:

“I open the piano lid and crawl inside.

If they search long enough, they’ll find me.”

Perhaps the speaker is lamenting on the ever fading privacy which seems to be an on-going predicament for human beings in the 21st century. These lines conclude the poem in a way I relate to. Perhaps the poet is pointing to an intrinsic, human need for solitude. The very last line alludes to a kind of hope, and a kind of paranoia at the same time. I find McLeod’s lines complex at the right times, and simple at the right times. This is a poet of depth, of a range which embraces the often elaborate and complicated modes in which a humane voice finds it possible to spring forth.

The brilliant poet Nikki Wallschlaeger recently illumined her views of craft to me during a Twitter exchange. She said (paraphrased), that she views craft as a poet’s own authentic way of communicating in their own voice, in their own style, so when you read a poet, you know it’s them, there’s no mistaking it. I was reminded of this exchange while reflecting on McLeod’s work. While I'm certain there is a long list of influences and inspirations behind McLeod's poems, his craft seems to be uniquely his own. The voice, tone, and style are primed for deep listening.

Reading DREAM KITCHEN was my second encounter with this poet’s work, so I don’t feel I have a big picture idea of precisely what may follow this collection, though this is definitely fertile grounds for a promising poetic craftsman to flourish.

I don’t know that I am ever capable of fully understanding what a particular artist or poet is doing. And I’m not usually concerned with understanding poems in this way, either. One thing I learned from, or rather, was reminded of, in my reading of DREAM KITCHEN, is to strive to see and appreciate where the poet is coming from, and to meet them there, on their own turf, so to speak. There is a great reward in meeting the poet on this sacred ground.

Certainly, writing poetry is work. And I think reading can involve work as well. It is an enjoyable kind of labor, sure, but it can’t be a one-way street. I felt like I was immersed in a world that was similar to my own, but not quite the same. A voice and points of view that were similar to my own, but with a tinge of difference to them. This dual feeling of familiarity and difference is welcome, cherished, and I am grateful to celebrate the gift of poetry with Owen McLeod as I continue my reading and explorations of DREAM KITCHEN.

From the University of North Texas Press:

Owen McLeod’s extraordinary debut maps the contours of an ordinary life: the rise and fall of romantic love, the struggle against mental illness, and the unending quest for meaning and transcendence. Ranging from sonnets and sestinas to experimental forms, these poems are unified by their musicality, devotion to craft, and openness of heart.